Ivorian right-back Emmanuel Eboue had his breakthrough season at Arsenal during the 2005/06 season. It was his second season at the club on the back of his transfer from Beveren in the Belgium league. Eboue began the season in the reserve team and he scored one of the goals in the 3-0 win over home team Sunderland in the League Cup on October 22, 2005. 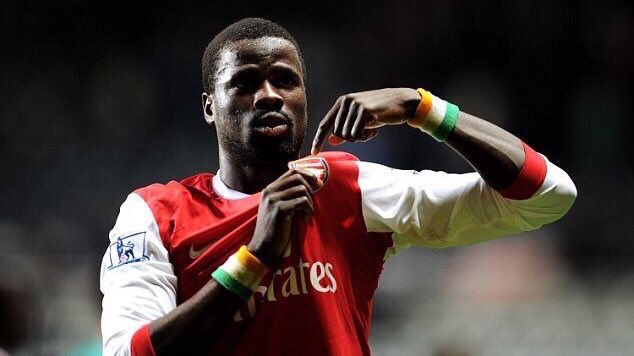 Emmanuel Ebouerepresented Ivory Coast at the 2006 African Cup of Nations (AFCON) tournament and he returned to action immediately upon his return to Arsenal due to the injury to first-choice right-back and fellow African star Lauren. He came into the Arsenal starting XI for the injured Lauren during the Premier League clash with hosts Liverpool at Anfield. He became the first choice in the right-back area of the Arsenal team after Lauren was ruled out until the end of the season with a serious injury.

Eboue was part of the Arsenal defence that went on a two-match run without conceding a single goal during the 2005/06 season. He was a member of the four-man defence alongside Frenchman Mathieu Flamini, Swiss star Philippe Senderos and compatriot KoloToure. The run included two-legged ties against Italian Serie A side Juventus and the Spanish duo of Real Madrid and Villarreal.

Arsenal manager Arsene Wenger was impressed with the way Emmanuel Eboue adapted to the team in the absence of the injured Lauren to the extent that he compared him with Brazilian winger Garrincha at the end of the Aston Villa game in the league on April 1, 2006. The right-back had produced an energetic display during the Villa game thereby drawing praise from his manager.

Eboue continued in his right-back role for the Gunners in the 2006 Champions League final in Paris. He was part of the Arsenal team that lost 2-1 to Spanish club Barcelona with ten men.