In an exclusive interview, fomer Arsenal defender Justin Hoyte has revealed more about iconic former team-mate Emmanuel Eboue’s antics when meeting the Queen at Buckingham Palace.  Arsenal defender Emmanuel Eboue broke Buckingham Palace protocol in a hilarious moment of madness when meeting the Queen. The Gunners became the first and only ever football club to be invited for a spot of afternoon tea with Queen Elizabeth II at the palace in January 2007. And the visit was everything you’d expect, with various blunders, awkward suits and classic Arsene Wenger comments. 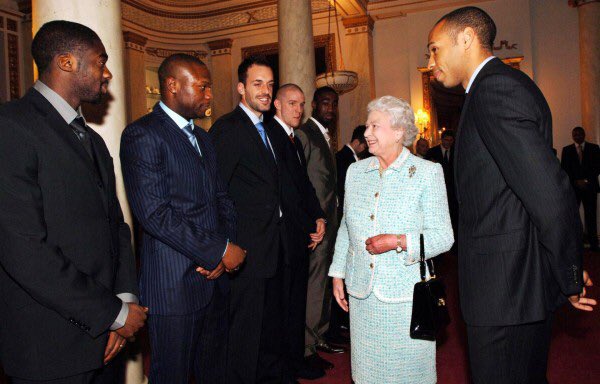 One of the now more famous parts of the visit was the jaw-dropping moment defender Emmanuel Eboue requested to change profession to look after the corgis, much to Her Majesty’s amusement. But Eboue’s former team-mate and fellow Arsenal right-back Justin Hoyte has now revealed the Ivorian actually went one step further and played with the dogs in the palace halls.

Hoyte exclusively told Daily Star Sport that Eboue was actually the funniest one. Before the Queen comes the dogs come in and that’s when you kind of know. And he was the first one to make a movement – the Queen comes in and he starts playing with the dogs! He added that everyone’s like, you know we’ve been briefed on what we should or shouldn’t do?’ It was funny to see him do that and everyone just staring at him thinking what on earth are you doing, do you know where we are?

Eboue was able to avoid being reprimanded by the palace and Arsenal officials after the meeting, with the Ivorian’s loveable personality bringing a memorable warmth to the occasion. Meanwhile, Hoyte admitted his regret at being one of just two players, alongside fellow Englishman Theo Walcott, to turn down an offer of tea. And he explained how he felt saddened when hearing of the Queen’s passing, especially having been one of those fortunate enough to meet her in person.