Retired Ivorian international Emmanuel Eboue didn’t win the UEFA Champions League (UCL) trophy before he called time on his career as a professional footballer. He came close to winning the competition during the 2005/06 season as part of the Arsenal team beaten by eventual winners Barcelona during the 2006 Champions League final. The Catalans came from behind to beat Arsenal 2-1 at the Stade de France in Saint-Denis. The Gunners had to play the majority of the game with ten men after goalkeeper Jens Lehmann was sent off for a foul on Samuel Eto’o outside the box. Lehmann became the first player to see red in the final of the European Cup/Champions League. 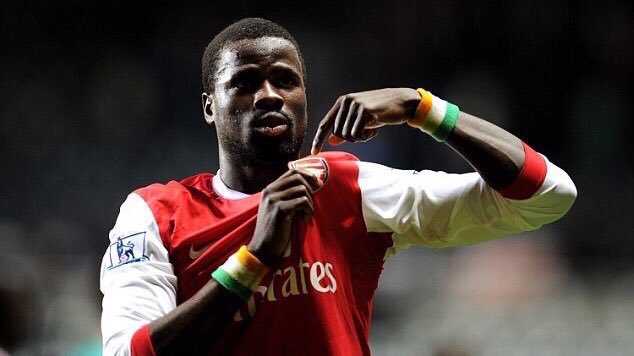 Emmanuel Eboue was an important part of the Arsenal defence with the record of ten successive clean sheets in the Champions League during the aforementioned season. The record of consecutive clean sheets has not been broken till date. Emmanuel Eboue operated on the right side of the Arsenal defence, while compatriot KoloToure was next to him on the right side of the central defence. In the absence of Sol Campbell due to injury, Philippe Senderosdeputised on the left side of the central defence, while Frenchman Mathieu Flamini was also the deputy for Ashley Cole on the left side of defence.

Despite their numerical disadvantage, Arsenal took the lead through Sol Campbell on 37 minutes as they took a lead into the break. Barcelona waited until the last fourteen minutes of the game to turn the deficit around. Samuel Eto’o scored the equaliser for the Catalan giants on 76 minutes before the winning goal arrived through JulianoBellettifour minutes later.

With the goals from Eto’o and Belletti, La Liga side Barcelona won the Champions League for the first time and a second European Cup overall.